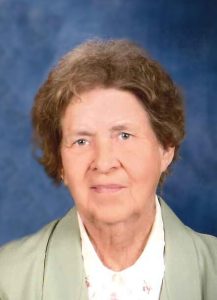 Visitation Monday 9-10 A.M. at the church

Committal in the Marietta Cemetery, Bellwood

Marcy Schmid passed away peacefully, surrounded by her family, on Monday, October 1, 2018, at the Hospital in David City.  Marcella Schmid was born to James and Caroline (Novak) Kouma, in Dwight on August 22, 1932.  She attended Dwight area schools. Before getting married, she worked at JC Pennys in Columbus.  On April 28, 1953, Marcy married Bernard Schmid in St. Joseph's Catholic Church, Bellwood.  She and Bernard lived on the family farm where they raised their six children.  After the children were grown, Marcy cleaned houses in Columbus until her health no longer allowed.  She loved being outdoors, in the garden and caring for her flowers.  She especially loved watching her family grow and spending time with her grandkids.  Marcy was  a member of St. Joseph's and the PCCW.