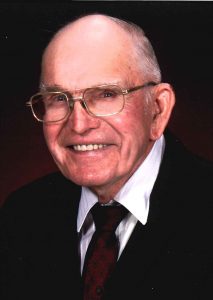 Military Honors after mass at church

Memorials in Lieu of flowers:

Lunch at the David City Auditorium

Eugene E. Grubaugh was born September25, 1928, at rural Rising City, Nebraska to Arthur and Ida (Hickstein) Grubaugh.  He attended schools in Rising City and Shelby, graduating from Shelby High School.  Eugene served in the United States Army in the field artillery battalion from 1950 to 1952.  He had served in Germany and was honorably discharged.

On October 15, 1955, he was united in marriage to Margaret Kohn in Esbon, Kansas.  Eight children were born to this union.  They lived in David City and Eugene worked as superintendent of Utilities for David City from 1947 to 1994.  He led a very charitable life, serving his community in many capacities and belonged to many organizations;