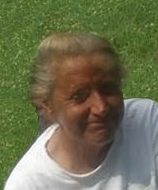 In lieu of Flowers-- Memorials in care of the family

Betty Mae Schoen was born January 12, 1958, in Sioux City, Iowa to Melvin and Catherine (Beaubien) Foster.  She received her education in Sioux City Schools.  In the early 80's, Betty moved to Schuyler where she worked several years at Cargill Meat Solutions and then as a cook for the Golden Living Center in Schuyler.  Betty loved the outdoors, cooking and watching wrestling.  She was never more content than when she could spend time with her grandchildren.