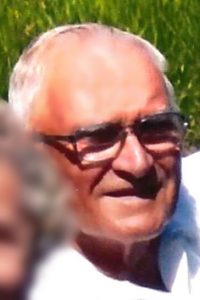 Joseph Alexander was born August 11, 1927 in Laurel, Nebraska to Joseph and Arlie (Oddle) Alexander.  He attended school at Lyons, Nebraska.  Joe moved to Bruno in July of 1950, where he worked at the Bruno Coop elevator.  On October 20, 1973, he was united in marriage to Helen Polacek at St. Anthony’s Catholic Church in Bruno.  He later worked at Lincoln Steel, and the packing plant in Schuyler until retiring.

He was a member of the Knights of Columbus Bishop Flavin Council #11652, and was a 4th degree knight.  Joe also served in the United States Coast Guard and United States Marine Corps.

Joe is survived by his wife Helen of Bruno, Brother Ernest (Dorell) Alexander of Norfolk, sister Erma Shaver of Lyons, and many nieces and nephews.  He was preceded in death by his parents, Sisters Helen and Shirley.