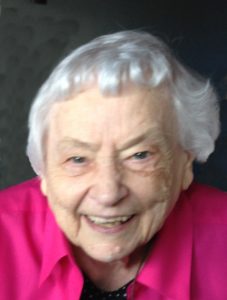 Mayme A. Viglicky was born on April 15, 1919 to Joseph and Antonia (Chvatal) Jaros.  She attended school at Abie Public and graduated from Schuyler High School in 1937.  Prior to her marriage, she taught in the area.  On August 17, 1938, she married Leonard Viglicky at Sts. Peter and Paul Catholic Church in Abie, Nebraska.  They resided near Edholm until 1998 when she moved to Schuyler.  She enjoyed cooking for her family – dumplings among her best work.  Those brownies in the Christmas tin never disappointed.  Every birthday or celebration in the family had to have balloons.  Her greatest beauty was her faith and her rosary.  Right up there with her faith and rosary were her beautiful twin great grandchildren, Matt and Molly.  She helped care for them and was a constant in their lives until her death.  She was simple, gracious and faith filled.