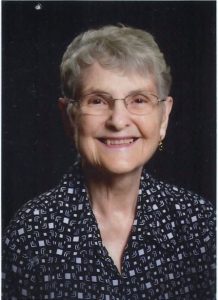 One hour prior to services Monday at the church

Memorials to Trinity or Donor's Choice

A funeral service will be held 10:30 Monday, September 12th at Trinity Lutheran Church, 2205 25th Street in Columbus with Pastor Wayne Nestor officiating. Visitation will be 2-5 pm Sunday, September 11th at Kracl Funeral Chapel, 1622 F Street in Schuyler and 9:30 to 10:30 A.M. with 10:15 A.M. Family prayer service at the church. Interment will be at Columbus Cemetery following the service.

Dorothy Louise Seckman was born October 28, 1928 in North Bend Nebraska to Hulda Wiese and William Schmale.  She grew up on a farm and loved farm life. She cared for her younger brothers and sisters on the farm during an extended medical absence of her mother. Dorothy worked at Wacha's clothing store in Schuyler and was a member of St. John's Lutheran Church where she was baptized and confirmed.  On June 17, 1951 Dorothy married Eugene Seckman.  In 1966 the family moved to Columbus where she was a faithful member of Trinity Lutheran church. She saw to it that her children attended church and Sunday school every Sunday and read Bible stories daily to them when they were young.  She taught Sunday School and was a member of the Ladies Aid. She was famous for her rhubarb cream pie, requested by family every holiday. Dorothy loved her family and friends.

In lieu of flowers, memorials are suggested to Trinity Lutheran Memorial fund.