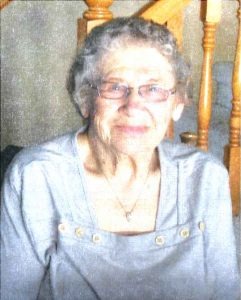 Helen was born June 15, 1924 on a farm near Brainard, Nebraska, to James and Julia (Kobza) Svoboda.  She attended David City Public Schools and graduated from David City High School in 1943.  On February 5, 1948, Helen was united in marriage to James Svitak in David City, Nebraska.  Helen had lived in the David City area all her life, having worked at Henningsen foods, and cleaning at the First National Bank.  Helen loved to play bingo at the V.F.W. hall and the K.C. hall in David City.  She was also a member of St. Mary’s Catholic Church.

She was preceded in death by her parents, husband James in October of 1990, 6 brothers, Louis, Jimmy, Emil, William, Theodore and Julius.  Sisters in law Emily and Dorothy Svoboda, nephew John Svoboda.