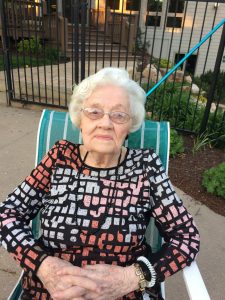 Committal in the Schuyler Cemetery  Lunch in the church hall

Goldie Dora Shoultz Kluck of Schuyler, died 4 days shy of her 105th birthday.  She was born May 12, 1917 on a farm near Clarkson, Nebraska to Annie Rose Palensky Shoultz and Frank Shoultz and weighed 3 pounds.  She was kept in a shoebox on an open oven door to keep her warm.  From that point on she grew into a strong (warrior) woman and a role model to her family.  Goldie was preceded in death by her parents, husband of 64 years, Cyril Kluck, her oldest son Richard Kluck, sisters Velda Trofholz, LaVay Pollard and a brother, Richard Shoultz.

Goldie graduated from Schuyler High School in1933 and began teaching at District 47 in Colfax County.  She married Cyril Kluck on August 9, 1935.  The marriage had to be kept secret since during the Great Depression married women did not teach.  She loved living on the farm and was known for her huge flower and vegetable gardens.  In later years she enjoyed not only her grandchildren and great-grandchildren (the naughtier the better), but also playing pitch, Rummikub and bingo, all of which she hated to lose.

Goldie is survived by many loved ones including her daughters Judy (Jim) Cada, Alice Bevans(Ron, Deceased), Nancy (Wayne) Kehrli and her son Dan Kluck along with 7 grandchildren and 16 great-grandchildren.