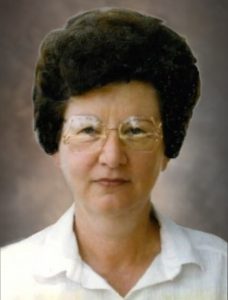 Darlene was born February 25, 1935, in Colfax County to Rudolph and Libbie (Jura) Richtig.  She attended rural Colfax County schools, graduated from Clarkson High School and later attended summer school at Wayne State Teachers College.  On June 1, 1957, she married Robert Urbanek at Sts. Peter and Paul Catholic Church in Howells.  They lived in Stanton for a while where they both taught school, she in a country school and Robert at the High School.  In 1959 they moved to Schuyler, Robert teaching at Schuyler High School and Darlene in rural Colfax County.  Darlene especially loved flowers and had a green thumb.  She had flowers in the house and outside in the yard.  Every vacant spot was filled with flowers.  She also enjoyed Czech meals and Czech music.  She and Robert attended at least one dance a week.

She is survived by her husband, Robert of Schuyler, brother-in-law  Richard (Dorothy) Urbanek of Clarkson, a niece and two nephews.  She was preceded in death by her parents and one nephew, Keith Urbanek.