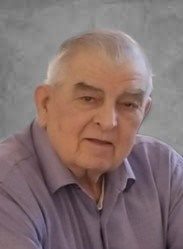 Committal with Military Honors at the Schuyler Cemetery

In lieu of flowers, plants and statues, the family requests memorials for future designation to local charities

In lieu of thank you's, the family will make a donation in "Buck's" name to a local charity

Verlyn Eugene Kracl, better known as Buck was born May 16, 1931 in Schuyler, Nebraska to Frank and Eloise (Hooper) Kracl.

He received his education in Schuyler and then entered the military April 13, 1952, serving as an equipment operator in the U.S. Army. He was honorably discharged as Sergeant on April 13, 1960.

On October 5, 1956 he married Rose Ann Rezac in David City, Nebraska. Together they raised eight children.

Buck started working at Higgins Milling Company, but later started working side by side with his dad in the mechanic business, eventually taking over the business known as Kracl Garage.

Buck loved being a mechanic and his mind was always in motion. He could fix anything!! He enjoyed his Czech Heritage listening, singing and dancing to polka music and was a regular caller to request a song on the Sunday Polka show.

Buck was a member of the Schuyler Chamber of Commerce for over 40 years , and served for many years in the Schuyler Volunteer Fire Dept., where he was an honorary member.

He and Rose Ann recently celebrated their 63rd wedding anniversary with family and friends. Family meant a lot to him and this included his beloved four-legged family members, Shelby and Skye.