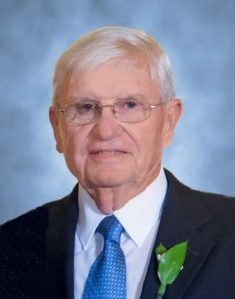 Visitation Monday 5-7 P.M. with 7 P.M. Rosary for Knights and Parish

Maurice was born November 9, 1935, in Schuyler, to James H. "Harry" and June (Binder) Flynn.  He attended Schuyler Schools and graduated from Schuyler High.  He then went on to the University of Nebraska and received a Bachelors Degree in Agriculture.  On April 15, 1961, he married Anita Maresh at St. Wenceslaus Catholic Church in Dodge.  They lived in Schuyler where Maurice farmed and over the years was owner and operator of Flynn Hybrid Seed, Flynn and Rydel Lawn and Garden Center and JMJ Feed Mill.  After "retiring", he worked for Fleischer Manufacturing in Columbus.  He was a man of strong faith and a very devoted husband of 58 years.  He was a regular at the Arrow Inn coffee table and currently the coffee group at the Scalehouse.  Maurice enjoyed golf, walking and exercising and most of all time spent with the grandchildren.  He held season tickets to Big Red Football since 1963, had served on the Schuyler Board of Public Works for 40 years, belonged to the church and the Knights of Columbus and served in the United States Army Reserves.