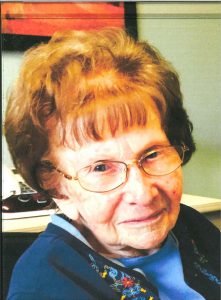 Committal in the Schuyler Cemetery--Lunch in the Fellowship Hall

Henrietta was born February 3, 1918, in Colfax County to Henry and Effie (Fuhr) Foust.  She received her education in Colfax County Schools.  On April 8, 1947, she married Glenn Schmidt at the First Presbyterian Church in Schuyler.  They farmed near Fort Calhoun for two years and returned to Schuyler where they lived and farmed the reminder of their lives.  Henrietta was a homemaker and loved gardening and caring for her flowers.  She enjoyed travelling with Glenn and her greatest love was her grandchildren and great-grandchildren.  She was a member of the First Presbyterian Church for well over 50 years as well as the Rebekah Lodge and Eastern Star.

Preceding her in death were her parents, husband, one son, Ervin Schmidt, two sisters; Bernice Wolfe and Iva Graham and a brother, Henry N. Foust.